Journal of Anesthesia and Intensive Care

Why Publish with us :

Copyright: © 2021 Chatterjee A, et al. This is an open-access article distributed under the terms of the Creative Commons Attribution License, which permits unrestricted use, distribution, and reproduction in any medium, provided the original author and source are credited.

Background and Aims: To compare the efficacy of ultrasound devices in determining the correct endotracheal tube size for intubation in children in respect to other traditional formulas.

Materials and Methods: This is a prospective observational cross-sectional study. Patients between ages 1 year to 6 years were categorized into two groups, 35 patients in each group. Ultrasound-guided measurement of subglottic diameter was performed in group A (N=35) and subsequent endotracheal tubes of corresponding internal diameter were inserted. Similarly, sizes of endotracheal tubes calculated based on age-related formula were inserted in group B (N=35). First pass success rate and complications were compared between the above two groups.

Results: The number of attempts of intubation in the ultrasound-guided group (Group A, n=35/70) was lesser than the age-based group (Group B, n=35/70)which was statistically significant [p value is 0.021509] (p<0.05). Overall complications arising out of repeated attempts of intubation were also significantly less in the ultrasound group. (p<0.05) But individual complications arising out of failed intubations were not statistically significant with no meaningful difference between them (p=0.303077).

Conclusion: Ultrasonography seems to be a better option than traditional formulas in predicting the correct size of endotracheal tubes in respect of preventing repeated attempts of intubation and perioperative complications.

Pediatric airway assessment has been a challenging task for so long amongst anesthesiologists. Knowledge of the influence of age of the child on laryngeal dimensions is essential for all practitioners who are dealing with the pediatric airway [1,2]. Moreover, assessment of pediatric airway requires cooperation on part of the patient. Most of the bedside tests for this purpose have a poor interobserver agreement and poor positive predictive value [3] Pediatric patients have a relatively larger head and tongue, narrower nasal passages, anterior and cephalad larynx. In the neonatal period, the trachea is funnel-shaped with the upper end wider than the lower, and as age advances, it becomes cylindrical [4]. Some may have relatively longer epiglottis, shorter trachea, and neck, or more prominent adenoids and tonsils. Various formulas had been proposed by researchers in the past based on age, height, the diameter of little fingers of both hands [4,5]. Insertion of a tube that is too small will result in inadequate ventilation, poor reliability of endtidal gas monitoring, leakage of anesthetic gases into the environment, and risk of aspiration. Conversely, the endotracheal tube that is too large has the probability to cause upper airway injury, airway edema, and subsequent subglottic stenosis. Recently ultrasound measurement of subglottic diameter had paved the way for accurate estimation of pediatric airway, thus minimizing chances of multiple laryngoscopies and putting appropriately sized endotracheal tubes with acceptable leak and reducing the above-mentioned complications [6]. But most of these studies have been done in western populations who have significant differences in corresponding height, ethnicity, and airway parameters than the Indian population [7,8].

This study was formulated in order to compare the efficacy of ultrasound with traditional formulas for estimation of the correct size of endotracheal tubes in children to decrease perioperative complications of airway manipulation.

The prospective observational study was conducted on children undergoing elective surgical procedures in the Special Surgery Operation Theatre of R.G. Kar Medical College and Hospital from January 2021 to June 2021. The study was initiated after approval from the Institutional Ethics Committee. Written informed consent was obtained after proper counseling from 70 patients included in the study, 35 in each group, as per inclusion and exclusion criteria. (Inclusion criteria: Children posted for elective surgeries, children between the age of 1 year to 6 years, children without any significant co-morbidities; ASA physical status 1 and 2, and children with normal airway and no anticipated difficult airway, Exclusion criteria: children with a suspected difficult airway, recent upper airway infection and associated co-morbidities).

Sample Size Calculation: One study found that the lifetime prevalence of surgical procedures was 1.77% among children. So

The formula used for sample size calculation was as follows: -

70 patients were taken and divided into two groups

Patients entered the Operation Theatre after the proper pre-anesthetic check-ups. Patients were positioned supine with their head and neck at the optimum position for intubation. Monitors were attached as per ASA guidelines for checking heart rate, electrocardiogram tracing, noninvasive blood pressure, saturation, and temperature. Patients in each group [ultrasound (group A) and agebased (group B)] were chosen randomly. They were kept nil per oral from 6 hours prior to surgery for solid food and clear fluid was allowed till 2 hours prior to surgery. The patients in group A were premedicated with intranasal dexmedetomidine 2 microgram/kg after securing intravenous access and subglottic diameter was assessed with head extended and neck flexed with highresolution B mode ultrasonography with a small footprint linear probe having frequencies 7 to 15 MHz and length 40 mm. A predetermined standard scanning plane was used to prevent any examination bias and artifacts. True vocal cord localization was done which is seen as paired hyperechoic linear structures which move on respiration and swallowing. Then the probe was moved caudally to visualize the cricoid arch in order to avoid any confusion between the cricoid cartilage and the tracheal ring. The measure of tracheal diameter was taken as the transverse air column diameter measurement done at the cephalic half of the cricoid cartilage which is narrower than the caudal part. (Ultrasonographic measurement of endotracheal tube diameter which corresponds to minimal transverse diameter of the subglottic airway (MTDSA).

The estimated internal diameter in patients of group B was calculated on the standard formula (Age/4 +4), and a 0.5 mm smaller internal diameter cuffed endotracheal tube was chosen. After checking the pre-anesthesia checklist, patients were pre-oxygenated with 100% oxygen. Fentanyl (2µg/kg) and Midazolam (0.05mg/kg) were administered after securing the intravenous line followed by an appropriate induction agent (incremental concentrations of sevoflurane via Jackson Rees Modification of Ayre’s T piece]. After achieving adequate relaxation with atracurium (0.6mg/kg), tracheal intubation was done with a cuffed endotracheal tube of corresponding internal diameter as had been obtained on pre-operative assessment from estimated outer diameter and position confirmed by capnography and auscultation of bilateral equal breath sounds. Heart rate, saturation, and mean arterial blood pressure were monitored at the following intervals: baseline (before induction), 1 minute, and 5 minutes after intubation. Hemodynamic changes, number of attempts of intubation, and complications like postoperative sore throat, stridor, mucosal injury, and bronchospasm arising out of the process were taken into consideration for the analysis of the study.

For statistical analysis, data were entered into a Microsoft Excel spreadsheet and then analyzed by SPSS (version 20.0; SPSS Inc, Chicago IL, USA). Data has been summarized as mean and standard deviation for numerical variables and count percentage for categorical variables. Using independent t-test and chi-square test p-value was calculated. P-value <0.05 was considered significant. 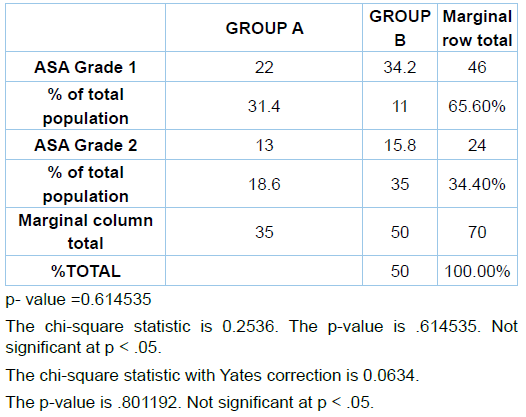 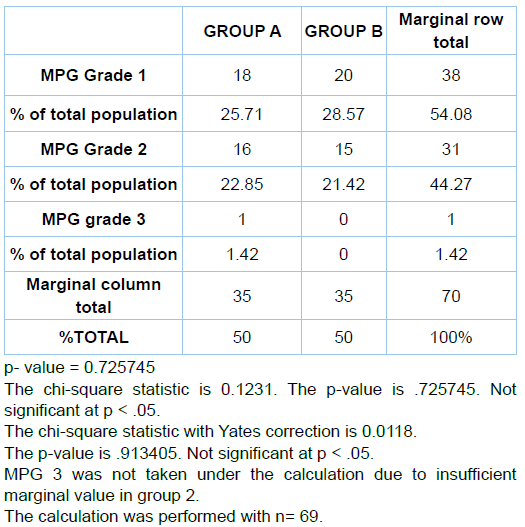 Table 4: Comparison of preinduction and post-intubation (at 1 minute) Heart rate, SPO2 and MAP in-between groups A and B. 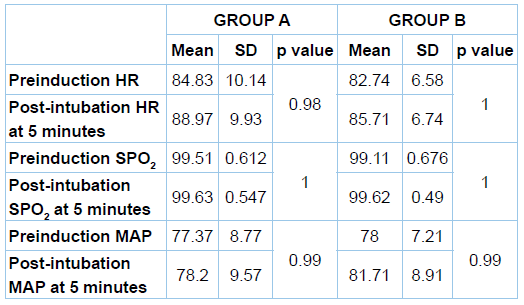 Table 5: Comparison of preinduction and post-intubation (at 5 minutes) Heart rate, SPO2 and MAP in-between group A and B 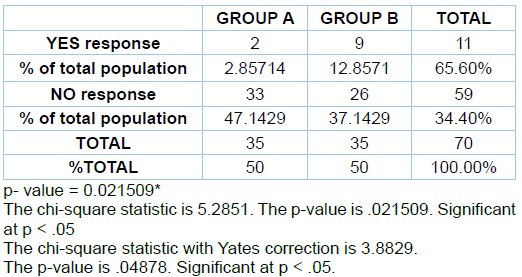 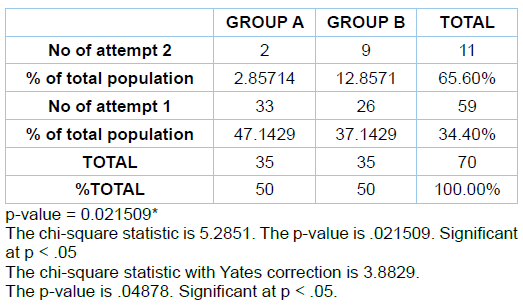 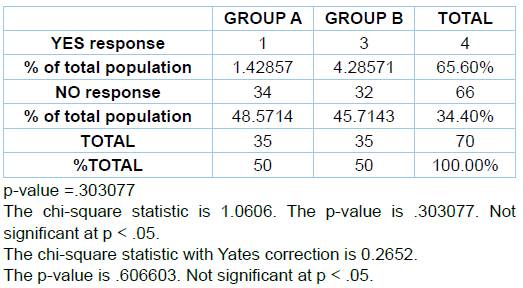 Table 8: Number of HOARSENESS arises in between Group A and Group B. 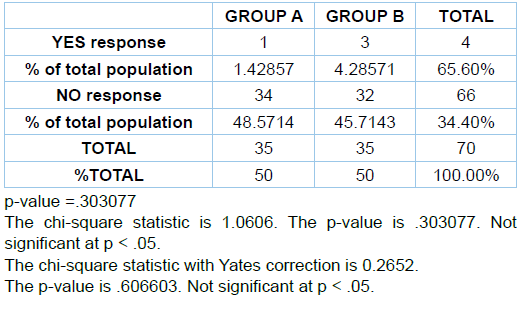 Table 9: Number of STRIDOR arises in between Group A and Group B. 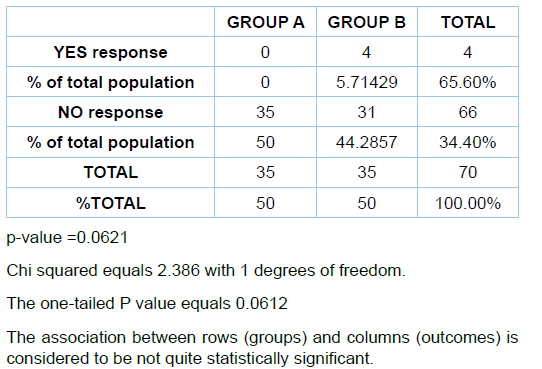 Table 10: Number of TRACHEAL MUCOSAL INJURY arises in between Group A and Group B. 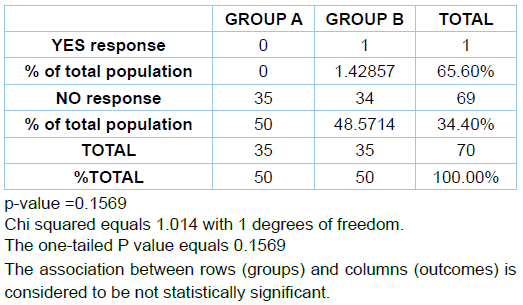 Table 11: Number of BRONCHOSPASM arises in between Group A and Group B.

The present study shows that ultrasonography offers a more accurate means of selecting a correctly sized endotracheal tube in children than the age-based formula. The number of attempts of intubation was significantly less in an ultrasound-based group than the age-based group. Similarly, complications arising out of repeated attempts of laryngoscopy were also more in the age-based group. But the individual complications like postoperative sore throat, stridor, tracheal mucosal injury, aspiration giving rise to bronchospasm were compared among both the groups and were not statistically significant.

In another prospective study done by Dr. Shibasaki et al. in a total of 192 children of age between 1 month and 6 years, the rate of agreement between the predicted endotracheal tube size based on the ultrasonic measurement and the final tube size selected clinically was 98% for cuffed tubes and 96 % for un-cuffed tubes. We have used only cuffed tubes for our study.

Dr. Schramm et al conducted a study on 50 children of age less than 5 years and found that measurement of the minimal transverse diameter of the subglottic airway (MTDSA) by ultrasound facilitates the selection of correct endotracheal tube in pediatric patients and minimize the number of re-intubation [10], similar to our study.

Kim et al, in their study on 215 children of age between 1-72 months, showed that ultrasound-guided endotracheal tube size at subglottic diameter was more accurate than age or height-based formulas [11], which conforms to our study.

Ultrasonography thus has recently found a place in anesthesiology and is a newer modality in airway assessment [9,10]. Though it is an operator dependant technique, it is relatively easy to learn and with adequate expertise, can produce reliable results [11]. Other modes of airway assessment like chest X-Ray, Computed Tomography scan, Magnetic Resonance Imaging are comparatively expensive and require much co-operation on the patient’s behalf as well as sedation which can be easily avoided in ultrasonography [12,13].

As ultrasound cannot measure anteroposterior diameter in pediatric airway accurately and can lead to underestimation of correct endotracheal tube size, the transverse airway column was measured in the first group (Group A) [2,14,15]. The ultrasonography probe was placed either at the lower end of the cricoid ring or at the midpoint (as feasible), and the lower edge of hypoechoic cricoid cartilage was taken as a reference point for measurement of subglottic diameter. Endotracheal tubes of the same brand were selected for all the patients to avoid disparity in comparison groups. In the second group, endotracheal tube size was selected based on the patient’s age (Age/4+4). As cuffed tubes were used, 0.5 mm smaller internal diameter tubes were inserted which is used conventionally in pediatric patients [3,6] Among the patients in group A, only 5.7% patients had undergone repeated attempts of intubation, whereas, in 25% of patients of group B, repeated laryngoscopy had to be performed. A number of attempts of intubation, as well as complications, were thus higher in group B. But, among the individual complications like mucosal injury, bronchospasm, sore throat, no significant association was noted. Hemodynamic alterations noted in all failed intubations were also tabulated but showed no significant difference.

Several limitations to be considered in this study include manufacturer-based differences in endotracheal tube diameters and material. Also, this study was conducted in a single-center, urban academic Institute, so generalization of the results obtained from this study may not be feasible in other scenarios [1,3].

Ultrasound is found to be a better tool in predicting correct endotracheal tube size in children in comparison to age-based formula. Perioperative complications and repeated attempts were significantly reduced on the use of ultrasound. Thus, this study might promote the use of ultrasound in the institutes wherever feasible to improve the first pass success rate in children.